What do Chongqing security guards need to pay attention to during patrols?
- 2018-12-21-

Chongqing security guards to carry out patrol tasks, during the day to be brave and generous, quiet at night, eyes to be sharp, alert to down-to-earth, carefully identify a variety of sounds, vague, mild and suspicious symptoms. When patrolling, we should be vigilant and sensitive. We should go along the wall or the shadow of the tree. We should avoid the lights and hide ourselves so that we can reach the foresight of the enemy so that he cannot see my purpose. Generally speaking, people should not stay under the window or in front of the door to avoid suspicion. Be especially vigilant when you are over the bend. When traveling to the corner in the evening, we should slow down first and stop a little. We should first use the darkness of the corner to observe the movement in front of the wall. When no suspicious or special symptoms are found, we should turn around and prevent the suspect from attacking suddenly. More than two people perform patrol duties at the same time. Those who are in a position to do so should support each other and give full play to the advantages of collective strength.

During the day, Chongqing security guards can communicate through sight and gesture; at night, patrol guards can communicate by clapping their hands or flashing flashlights, but signals and codes should be agreed in advance. Remote, walkie-talkie contact application. Patrols must take the form of a combination of stopping the combination, ear, eye, nose, speed, slowness and sudden commutative. Cross-crossing methods can be used for patrol areas with good security conditions; For areas with complex or relatively remote security conditions, one or more patrol methods for reversing and killing horseshoe guns can be used; M can be used for key patrols and repeated patrols in the vicinity of important targets, key parts or busy sites in patrol areas. If suspicious circumstances are detected, close surveillance, careful observation and control should be strengthened to prevent the Commission of crime. When patrolling, we should carry out a thorough and detailed inspection of the residential area. We should always check the doors and windows upstairs and downstairs, especially the occupying units. At the same time, we have to inspect sewers and gas pipelines and point out designated locations. Carefully record the situation found during the patrol process, do a good job of shift work, night shift when the sound should be low, explain things or try to use walkie-talkie, reduce the volume, strictly prohibit loud noise, so as not to affect other residents.

Chongqing security guards should patrol at least once every two hours, but there should be no fixed time and route to prevent bandits from entering in vain. Special attention should be paid to hidden places and passageways such as stairs, corridors and billing rooms to ensure that suspicious persons are not allowed to hide in buildings and await opportunities for crime. Chongqing security guards should also pay attention to the dark corners near the doors of public places, the canals of the back lane, the toilets and the bottom of the water tank. Fire extinguishers are installed in the instrument room, computer room and garbage room. When patrolling, we always have to pay attention to whether they are obsolete, lost or used, rather than being replaced. The cleanliness of public places at all levels should be given attention. Waste that discards or clogs fire escape in public places shall be recorded immediately and consulted by the superior. Always check whether the water meter room in the building is immersed due to water meter leakage. In the event of such a situation, the security room shall be notified of the proper handling. All damage information should be recorded in the location of the log and submitted to the Supervisor for maintenance. In the event of an emergency or routine power outage, the patrol officer shall inspect the notice posted and prepare temporary lamp lighting, torches and candles for home use prior to the power outage. If the explosive throat is immersed in water, check that the engine has saline or fresh water and close it correctly. Sandbags should be placed to prevent damage to the elevator. The relevant units should be informed of the action and the notice should be posted and notified to the security room for assistance. 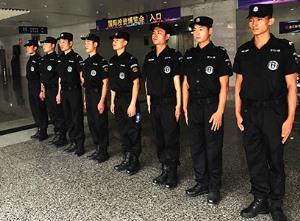 Previous: How Chongqing security services are handled in the event of an emergency

下一条: How to select Chongqing Security Company in Enterprises